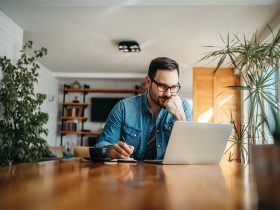 TIPS FOR SETTING UP A HOME OFFICE

It was with great interest I recently logged onto zoom to interview ‘The Impact Guru’ aka Esther Stanhope. In anticipation I’d re-read the Esther article that had initially caught my attention, enjoyed some of her videos, taken the time to navigate her website and ordered ‘Goodbye Glossophobia’, Esther’s Limited Edition book…interview by Juanita Shield-Laignel
I will start by sharing with you exactly what Glossophobia means according to google; ‘Glossophobia is the medical term for the strong fear of public speaking. It is one of the most common phobias: about 75% of the world’s population struggle with this social phobia, or social anxiety disorder, to some extent.’
With one thing and another we were both a little late coming to the zoom table and yet Esther remained unflustered and presented professionally in her ‘zoom room’ sporting a plain white background, a huge poster emblazoned with some of her work and enviable lighting, not to mention bedecked in her statement bright lipstick, groovy glasses and smart but casual jacket.
As is my want I asked Esther to go back to the beginning and tell me about her childhood and how she had come to be an Author, International Speaker and Personal Impact Expert working with some the world’s biggest names – but before that I wanted to know if she had ever worked in Jersey…

“Yes I have hosted a session within the last couple of years for Women in Banking for about 70 people, so I have a few clients in Jersey. They have asked me to come back some time. It was great, I love Jersey…I also did a leadership project for Confidence in Speaking with foreign students – young women. I stayed at the Radisson and spent some wonderful time walking around by the seafront and got accosted by seagulls…sorry just reminiscing and getting into the Jersey vibe!”
Satisfied that Esther is a suitable interloper for the Jerseylife interview slot, I listened intently whilst she regaled me with her life story. “When I was at school I was never that confident – given my work, people laugh at me when I say that and say things like ‘don’t be so silly Esther of course you’re confident’; they think I have natural born charisma…but if you are an extrovert it doesn’t necessarily mean you’re confident, it just means you have a personality type with lots of energy and usually talk a lot!” Esther laughed and carried on talking…!
“You can of course be confident in many things – you can be a confident cook or a confident swimmer but not a confident person in the world. I never thought I was very clever either. As one of six I was aware my siblings were bright, but my brother Harry, three years my senior, was a genius child. At four he was doing the work of an eight year old and at eight he’d achieved Piano Grade 5 and was playing Moonlight Sonata at concerts…so that’s what I thought clever looked like.”
“When he was just 40 my father died of a heart attack and not long after that, in class, Miss Buldock invited me to stand up and read out loud. I stood up, opened the book and couldn’t get the words out, my mind went totally blank, the words made no sense. Now in my late forties I have discovered I am 64% likely to be very dyslexic but of course didn’t know that at the time and there may have been some correlation to how I was feeling having lost my dad!”
“I was aware that many of my peers wanted to be Blue Peter Presenters but remember thinking I wanted to be the person with the ideas to make Tracey Island out of washing up liquid bottles; the person behind the scenes. I went to drama classes at The Questors Theatre in Ealing – the best amateur theatre in London. I loved being involved with telling stories, learning the craft and the combat arts but often choosing not to be the actor instead being the director. I was really confident at bringing the teams together and having ideas but no one ever said to me ‘you’re an ideas person’ – I just fudged it. I got my Drama Degree and did work experience at the BBC and Virgin Radio so fell into that world – but had no idea how to shape my career.” 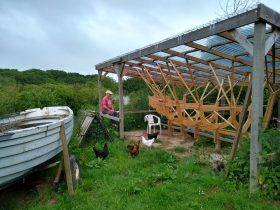